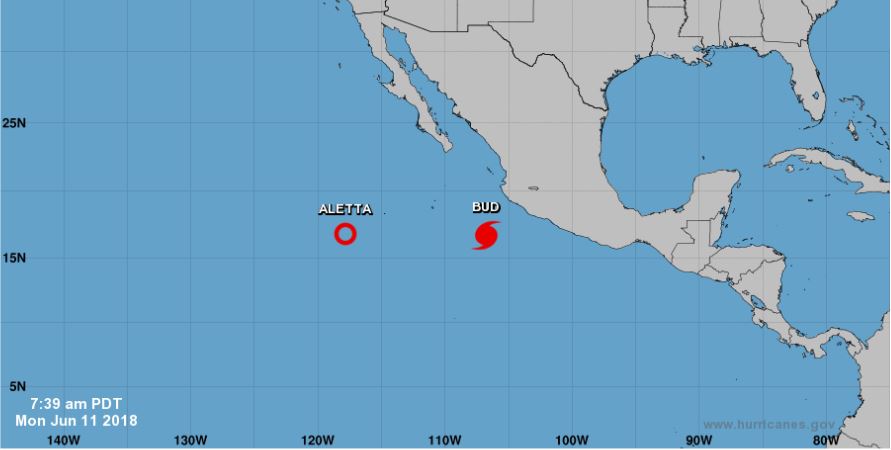 As you can see in the image, already ALETTA (depression) and BUD (hurricane) are in the eastern zone of the Pacific.

A tropical cyclone is a rapidly rotating storm system characterized by a low-pressure center, a closed low-level atmospheric circulation, strong winds, and a spiral arrangement of thunderstorms that produce heavy rain. Depending on its location and strength, a tropical cyclone is referred to by names such as hurricane, tropical storm, cyclonic storm, tropical depression, and simply cyclone.

Tropical cyclones typically form over large bodies of relatively warm water. They derive their energy through the evaporation of water from the ocean surface, which ultimately recondenses into clouds and rain when moist air rises and cools to saturation. This energy source differs from that of mid-latitude cyclonic storms, such as nor’easters and European windstorms, which are fueled primarily by horizontal temperature contrasts. The strong rotating winds of a tropical cyclone are a result of the conservation of angular momentum imparted by the Earth’s rotation as air flows inwards toward the axis of rotation. As a result, they rarely form within 5° of the equator. Tropical cyclones are typically between 100 and 2,000 km (62 and 1,243 mi) in diameter.

Hurricanes are one of the most destructive natural disasters in the world. Only large earthquakes and volcanoes are capable of make more damage. A large hurricane can cause millions of dollars in damage, claim thousands of lives and turn the city into hell.

If you wait to prepare until a hurricane is on the way and strikes, you’re making a major mistake that could potentially cost you your life and the lives of your family members.

The problem with hurricane warning signs is they’re not detectable until the hurricane is only a few hours away, giving you precious little time to prepare. Hopefully you’ll be alerted by the authorities or weather people on TV, online, or on the radio that a hurricane has developed. But in case you’re cut off from those kinds of communications and aren’t yet prepared for a hurricane, here are some warning signs to watch for:

Now that you’ve learned how to detect an imminent hurricane, you need to prepare for one. Here’s the truth: You don’t always have to evacuate in the event of a hurricane. We’ll discuss evacuation later, but for now we’re going to talk about what to do if you decide to stay home and ride out the storm.

As I mentioned earlier, hurricane preparedness is something you should do well in advance. A huge part of that preparedness will be preparing your home to outlast the disaster. Here’s what to do:

If you don’t have or can’t afford shutters, the cheapest option is plywood. Buy enough to cover every window, and go ahead and cut it to size so you have a piece for every window. Also stock up on screws, nails, and tension clips. Learn more in the video below.

Sometimes hurricanes are so strong that it’s more dangerous to try outlasting them in your home than it is to hit the road and evacuate. If a mandatory evacuation is necessary, the local authorities will make the decision and alert the population. But even if an evacuation is not made mandatory, you may decide that the incoming storm is too strong for you to stay put.

However, if you want too long to evacuate, it could be dangerous. The roads will be packed with other cars trying to get out of town, and you could end up experiencing a hurricane from inside your car. Even worse, the roads could become flooded, forcing you to abandon your vehicle. That’s why you need to evacuate as early as you can.

This is why you should keep your gas tank full.

Don’t get stuck in traffic like these people. Evacuate early!

The storm surge from a hurricane can be devastating.