New commercial satellite images released Monday have identified more than a dozen undeclared North Korean missile operating bases, another sign that Pyongyang is continuing to move forward with its ballistic missile program amid indications that talks with the US have stalled in recent months. 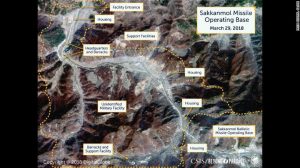 While the network of undeclared sites has long been known to American intelligence agencies, it has not been publicly acknowledged by President Donald Trump, who asserted that North Korea was “no longer a nuclear threat” following his June summit with dictator Kim Jong Un.
The CIA declined to comment on the images, but US officials have expressed concern about North Korea using hidden and undeclared locations to continue to work on improving their missile technology and possibly their nuclear program.
The new images, first reported by The New York Times, show researchers at the Beyond Parallel program at the Center for Strategic and International Studies have identified 13 of an estimated 20 hidden missile operating bases unreported by the North Korean government.
“These missile operating bases, which can be used for all classes of ballistic missile from short-range ballistic missile (SRBM) up to and including intercontinental ballistic missile (ICBM), would presumably have to be subject to declaration, verification, and dismantlement in any final and fully verifiable denuclearization deal,” the report states.

US intelligence has long assessed that the North Koreans have stored much of their weapons capability, including mobile missile launchers, in underground mountain bunkers.
Specifically, the images focus on the Sakkanmol missile base, which “currently houses a unit equipped with short-range ballistic missiles but could easily accommodate more capable medium-range ballistic warheads.”
“Despite the difference in interpretation between the US government and the North Koreans over what these declarations have meant, the Singapore declaration and the new Korean declaration, for North Korea watchers it has been pretty clear that the North has not been willing to give up its entire nuclear program, Lisa Collins a fellow with the Korea Chair at CSIS and one of the authors of the report, told CNN.
Monday’s report comes days after Trump told reporters his administration is “very happy with how it’s going with North Korea” despite the administration’s announcement, in the middle of the night as last week’s midterm elections results were coming in, that Secretary of State Mike Pompeo’s meeting with a key aide to North Korean leader Kim Jong Un had been postponed.

Trump has conveyed a starkly different image than the one painted by US military officials, foreign diplomats and sources familiar with developments who told CNN that the Democratic People’s Republic of Korea is “really angry” about the US refusal to offer sanctions relief and that personal friction between US and North Korean negotiators may be slowing progress.
A source familiar with the ongoing dance between officials in Washington and Pyongyang previously told CNN that North Korea’s stance is that the US “must make a move before we make the next one.”
But the US appears unwilling to oblige, at the moment, according to a US official, who said the Trump administration wants to move away from the “tit-for-tat” approach of the past.