NASA has updated its plans to deflect potentially hazardous Earth-bound asteroids — and none of them involve Bruce Willis.

The White House Office of Science and Technology Policy released a new report today (June 20) titled the “National Near-Earth Object Preparedness Strategy and Action Plan.” The 18-page document outlines the steps that NASA and the Federal Emergency Management Agency (FEMA) will take over the next 10 years to both prevent dangerous asteroids from striking Earth and prepare the country for the potential consequences of such an event.

Officials with NASA, FEMA and the White House discussed the new asteroid-mitigation strategies in a teleconference with the media today. “An asteroid impact is one of the possible scenarios that we must be prepared for,” Leviticus Lewis, chief of FEMA’s National Response Coordination Branch, told reporters during the teleconference, adding that a catastrophic asteroid strike is “a low-probability but high-consequence event” for which “some degree of preparedness is necessary.”

“This plan is an outline not only to enhance the hunt for hazardous asteroids, but also to better predict their chances of being an impact threat well into the future and the potential effects that it could have on Earth,” NASA’s planetary defense officer Lindley Johnson said during the teleconference. Johnson added that the plan will help NASA “step up our efforts to demonstrate possible asteroid deflection and other mitigation techniques, and to better formalize across the U.S. government the processes and protocols for dissemination of the best information available so that timely decisions can be made.”

Protecting Earth from incoming asteroids will be a huge job, but don’t expect astronauts to do it, NASA said. “That’s something relegated to the movies — it makes a good movie, but we do not see in our studies any technique that would require the involvement of astronauts,” Johnson said, adding that all of NASA’s proposed asteroid-deflection techniques “would all be done by robotic spacecraft.” 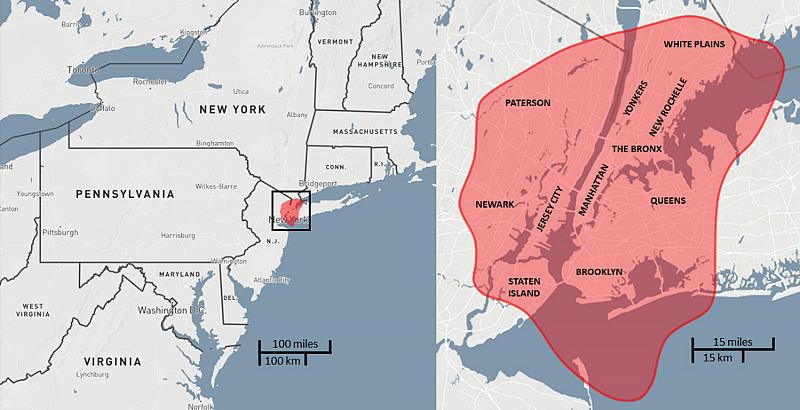 This graphic depicts the spatial extent of the damage if an asteroid measuring roughly 100 feet (30 meters) wide were to hit New York City. An asteroid that size famously exploded over Siberia on June 30, 1908. Known as the Tunguska event, this was the largest asteroid impact in recorded history. National Science & Technology Council

Five ways to prepare for asteroids

Five major objectives are detailed in the new plan. In the first, NASA is directed to lead a new effort to enhance the nation’s capabilities for detecting, tracking and characterizing near-Earth asteroids to “reduce current levels of uncertainty and aid in more accurate modeling and more effective decision-making,” the document states.

NASA already supports several ground-based observatories that scan the skies for asteroids — like the Catalina Sky Survey in Tucson, Arizona, the Pan-STARRS1 telescope in Maui — and the NEOWISE space telescope. While the new report doesn’t ask NASA scientists to start planning for additional missions, it does request that the agency “identify opportunities in existing and planned telescope programs to improve detection and tracking by enhancing the volume and quality of current data streams.”

The second goal listed in the document discusses the improvement of “modeling, prediction and information integration” across U.S. agencies to help predict the probability that an asteroid will hit Earth and determine exactly when and where an incoming asteroid could strike. Emergency-management teams like FEMA would use this information to determine the best course of action when preparing for an asteroid strike and dealing with the consequences after an impact occurs.

In the third objective, NASA is asked to come up with new ways to deflect an asteroid heading toward Earth. This involves developing new technologies for “rapid-response NEO reconnaissance missions,” in which a spacecraft could launch toward an Earth-bound asteroid and somehow change the space rock’s course so that it no longer posed a threat. NASA had plans to attempt this with the Asteroid Redirect Mission (ARM) in 2021, but the Trump administration scrapped that mission in 2017.