An earthquake is the perceptible shaking of the surface of the Earth, resulting from the sudden release of energy in the Earth’s crust that creates seismic waves. Earthquakes can be violent enough to toss people around and destroy whole cities. The seismicity or seismic activity of an area refers to the frequency, type and size of earthquakes experienced over a period of time.

The tragedies in Japan are a great example of how disaster can strike without expecting it.

Every year around 80 harmful earthquakes occur all over the world. Most earthquakes occur at the boundaries of tectonic plates, but they can also occur in the middle of a plate. The damage from an earthquake can range anywhere from a few broken dishes to collapsed buildings and bridges, water and power outages, fires, avalanches, and tsunamis (as what happened in Japan).

You have to secure everything

The first thing you have to do in earthquake preparedness involves securing everything in your home that could be a hazard.

Bolt bookcases, cabinets and other tall furniture to the wall.

You must have a disaster plan, like an evacuation route, a location where you can meet up with your family and friend, a secure place where you’ve stored emergency supplies and a list of important phone numbers. You should also know and identify the “safe places” in each room of your house, apartment or office. Safe places are usually under a sturdy table or desk, stay close to an interior wall and away from the  windows, tall furniture and hanging objects.

What to Do When the Earthquake Strikes

There are two theories and facts about what to do when an earthquake strikes.

Drop, cover, and hold on! and The Triangle of Life

Drop, cover, and hold on!

(from The American Red Cross)

Drop, Cover, and Hold On, means get near the floor, move to a safe place (which you’ve identified ahead of time), keep your head down and hang on to whatever you can. If you move too far during an earthquake you can injure yourself. 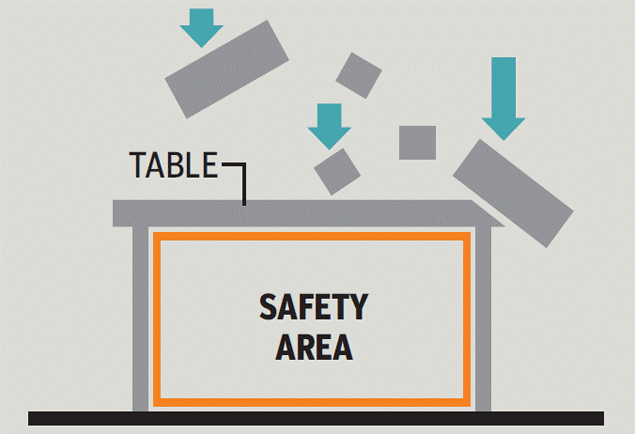 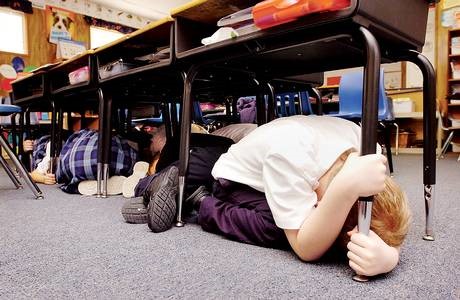 The Triangle of Life

The triangle of life is a space formed beside objects like sofas or other furniture when the roof falls on them. It is important that it is resists compression when the roof or wall falls on it. This safe space is called the “triangle of life “. The larger the object, the heavier and stronger, it is the less it will compact. The less the object compacts under the weight, the greater the size of the empty space or hole beside it, and the greater the possibility that the person using that space will not be injured. 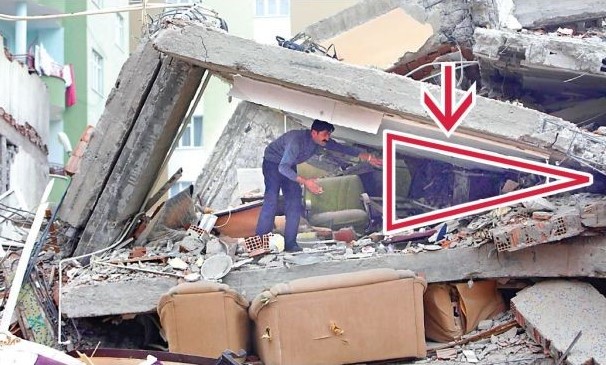 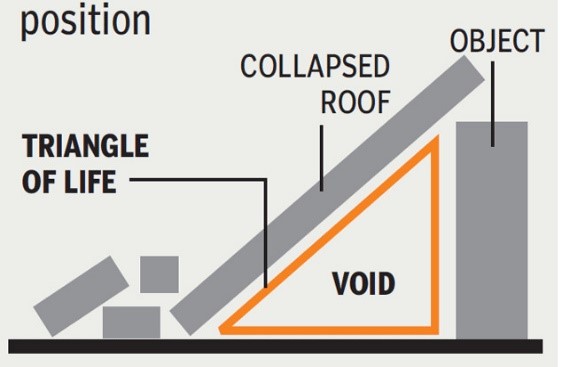 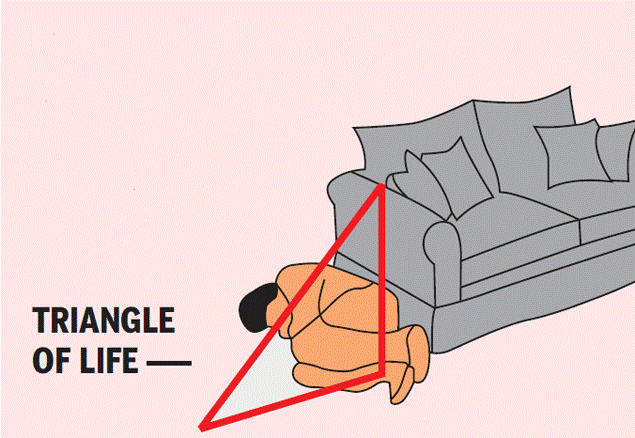 But which technique is better?

Recently, the American Red Cross became aware of a challenge to the earthquake safety advice “Drop, Cover, and Hold On.” This is according to information from Mr. Doug Copp (triangle of life), the Rescue Chief and Disaster Manager of American Rescue Team International. He says that going underneath objects during an earthquake (as in children being told to get under their desks at school) is very dangerous, and fatal should the building collapse in a strong earthquake. He also states that “everyone who gets under a doorway when a building collapses is killed.” He further states that “if you are in bed when an earthquake happens, to roll out of bed next to it,” and he also says that “If an earthquake happens while you are watching television and you cannot easily escape by getting out the door or window, then lie down and curl up in the fetal position next to a sofa, or large chair.”

Mr. Copp based his statements on observations of damage to buildings after an earthquake in Turkey. It’s like “apples and oranges” to compare building construction standards, techniques, engineering principles, and construction materials between Turkey and the United States.

The American Red Cross (Drop, Cover, and Hold On) have studied the research on the topic of earthquake safety for many years. They have benefited from extensive research done by the California Office of Emergency Services, California Seismic Safety Commission, professional and academic research organizations, and emergency management agencies, who have also studied the recommendation to “drop, cover, and hold on!” during the shaking of an earthquake.

We must consider that “drop, cover, and hold on!” is a U.S.-based recommendation based on U.S. Building Codes and construction standards. Much research in the United States has confirmed that “Drop, Cover, and Hold On!” has saved lives in the United States. Engineering researchers have demonstrated that very few buildings collapse or “pancake” in the U.S. as they might do in other countries.

The American Red Cross, being a U.S.-based organization, does not extend its recommendations to apply in other countries. What works here may not work elsewhere, so there is no dispute that the “void identification method” or the “Triangle of Life” may indeed be the best thing to teach in other countries where the risk of building collapse, even in moderate earthquakes, is great.

Drop, Cover, and Hold On, means get near the floor, move to a safe place (which you’ve identified ahead of time), keep your head down and hang on to whatever you can. If you move too far during an earthquake you can injure yourself.

The triangle of life is a space formed beside objects like sofas or other furniture when the roof falls on them. It is important that it is resists compression when the roof or wall falls on it. This safe space is called the “triangle of life “. The larger the object, the heavier and stronger, it is the less it will compact. The less the object compacts under the weight, the greater the size of the empty space or hole beside it, and the greater the possibility that the person using that space will not be injured.

If you’re in bed during an earthquake:

Drop, Cover, and Hold On says to stay there and cover your head with a pillow.

The triangle of life says that “if you are in bed when an earthquake happens, to roll out of bed next to it.

If you’re in a vehicle

Drop, Cover, and Hold On says pull over and keep your seat belt on. Wait until the earthquake is over, then check to see if you’re okay.

The triangle of life says to get out of your car during an earthquake and lie down next to it.

Be aware that earthquakes are often followed by aftershocks.

If you’re outside, get away from buildings, power lines, streetlights and other tall objects, then get down and cover your head.

Tsunamis are extremely dangerous. Even if the best you can do is run to the top of a hill or climb on top of a house that would be better than staying in place.

If you’re farther inland, the first thing you should do is look for people who need help. It’s a good idea to have some training in first aid and CPR. Also be on the lookout for fires, damaged gas and electrical lines, and other hazards and move away from them. Turn on your radio and listen for safety advisories and other information.

Talk to Your Family. You want everyone in your family to be as prepared as you are, so talk to them about what you’ve learned here. When earthquakes occur, people tend to panic and forget what they’re supposed to do. It’s better if they’ve put some thought into it ahead of time. Remind them where the safe places and disaster kits are and where to meet up afterward.

Based on years of research about how people are injured or killed during earthquakes, and the experiences of U.S. and international search and rescue teams, these actions are not recommended to protect yourself during earthquakes:

DO NOT run outside or to other rooms during shaking: The area near the exterior walls of a building is the most dangerous place to be. Windows, facades and architectural details are often the first parts of the building to collapse. To stay away from this danger zone, stay inside if you are inside and outside if you are outside. Also, shaking can be so strong that you will not be able to move far without falling down, and objects may fall or be thrown at you that you do not expect. Injuries can be avoided if you drop to the ground before the earthquake drops you.

DO NOT stand in a doorway: An enduring earthquake image of California is a collapsed adobe home with the door frame as the only standing part. From this came our belief that a doorway is the safest place to be during an earthquake. True- if you live in an old, unreinforced adobe house or some older woodframe houses. In modern houses, doorways are no stronger than any other part of the house, and the doorway does not protect you from the most likely source of injury- falling or flying objects. You also may not be able to brace yourself in the door during strong shaking. You are safer under a table.

What to Do After an Earthquake?

Check yourself and others for injuries. Provide first aid for anyone who needs it.

Check the water, electric lines for damage and gas. If any of them are damaged, shut off the valves. Check for the smell of gas. If you smell it, open all the windows and doors, leave immediately, and report it to the authorities (use someone else’s phone).

Turn on the radio and just use the phones for emergencies.

Don’t Stay inside damaged buildings. Stay away from them.

Wear boots or sturdy shoes to keep from cutting your feet. Be careful around broken glass and debris.

Tsunamis and seiches sometimes hit after the ground has stopped shaking. Stay away from beaches.

Stay away from damaged areas.

If you’re at school or work, follow the emergency plan or the instructions of the person in charge.