A massive volcano is sliding into the sea. History shows that could be catastrophic. 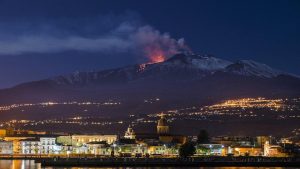 Sicily’s Mount Etna is one of the world’s most active volcanoes, but scientists say eruptions aren’t the only major threat posed by this smoldering peak.

A new study shows that Etna is slowly sliding toward the sea, raising the prospect that it may suddenly collapse and trigger a massive tsunami that could devastate the region around the eastern Mediterranean Sea.

“Etna is a big and heavy volcano, so gravity is pulling it down,” Morelia Urlaub, a research scientist at the GEOMAR Helmholtz Centre for Ocean Research in Kiel, Germany, and the study’s lead author, told NBC News MACH in an email. “It can spread more easily towards the sea as there is nothing to ‘stop’ it.”

The volcano’s slow subsidence has been known since the 1990s. But Urlaub and her colleagues used a network of underwater sensors along the volcano’s southeastern flank to get a detailed look at its movement.

Etna typically moves about 2 to 3 centimeters (about 1 inch) per year, according to Urlaub. In the recent study, published Oct. 10 in the journal Science Advances, the sensors showed that Etna’s creeping motion occasionally speeds up for weeks or months at a time as molten rock (magma) builds up underground before spewing out in an eruption; in 2017, the sensors detected a slip of 4 centimeters (about 2 inches) over eight days, without an associated eruption.

The sensors also detected motion in parts of the volcano’s flank that lie underwater, far from the heart of Etna’s volcanic activity — an unexpected finding that suggests that magma alone can’t account for the continuing slide.

“If rising magma would cause flank movement, then we would expect the largest movement to take place very close to the magma source,” Urlaub said. “But our measurements show that the flank moves even very far from the magma source.”

John Murray, a geologist at the Open University in the U.K., has spent decades studying Etna. He said he was surprised to learn that Etna moved so much over just an eight-day period. A sudden collapse of Etna could be “absolutely devastating” to the region, he said, but then offered a measure of reassurance about the risk.

“It’s clearly very worrying if this were to happen, but I have to emphasize that there’s absolutely no sign of this happening at this present time,” he said. “We need to know a lot more about it before we can make any kind of predictions like that.”

Urlaub agreed that the immediate risk is low. “We know from the geologic record that collapses are common in the life cycle of volcanoes,” she said. “But it is important to keep in mind that we are talking about geologic time scales here — Etna is 500,000 years old.”

But other volcanoes have shown just how catastrophic sudden collapses can be.

On May 18, 1980, the northern flank of Mount St. Helens, a volcano in Washington State, collapsed after a 5.1-magnitude earthquake struck the area. The resulting eruption and landslide caused what the U.S. Geological Survey called the “largest debris avalanche on Earth in recorded history.” It killed 57 people and caused $1.1 billion in damage, according to the agency.